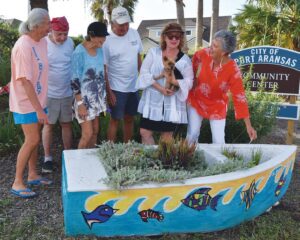 Garden club members gather around a Farley Boat planter at the Community Center. The club sells the planters as a fundraiser.

Those brightly painted boat-shaped planters you see around town are a fundraiser for the Port Aransas Garden Club.

The planters are molds of the historic Farley boats created by Fred Farley, a boat-builder in Port Aransas back in the early 1900s.

Several years ago, the garden club commissioned an artist to create a mold for the historic boats that could be used as planters. The club now offers them, unpainted, for sale to keep the history of Port Aransas in the forefront.

Port Aransas artist Flint Reed used a model made by Jo Leta Gavit to design the planters, which could not be made to scale because the original boats were too long and thin to make the planter proportionate.

The planters are in front of businesses and some homes all around town. Most are decorated in some manner, some much more flamboyantly than others. They don’t come that way – buyers paint and decorate them to suit their tastes.

About 6.5 feet long and 2.5 feet wide, they weigh about 1,800 pounds. The outside has a textured wood grain look. The Farley boat name is on both sides, and Port Aransas, Texas, is on the back. Two planting areas are inside the boats.

Self-guided tours of the boats located at businesses in Old Town were open prior to Hurricane Harvey, and remain on hold for the time-being.

The planters sell for $525. The price includes delivery within the City of Port Aransas or loading on a trailer if being taken outside the city limits.

Order forms can be found at www.portaransasgardenclub.org Completed order form and purchase agreement can be mailed or emailed to portagardenclub@hotmail.com. Farley Planters can be paid for with a check to Port Aransas Garden Club, P.O. Box 681, Port Aransas, TX 78373- 0681 or through PayPal on www.portaransasgardenclub.org. Orders are not complete until the order form and purchase agreement have been received by the garden club.

Contact Virginia Moser at (361) 834-4130 or portagardenclub@hotmail.com for additional information.