Fourth is celebrated with fireworks show 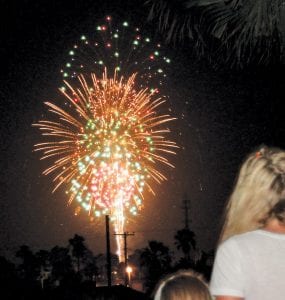 Fourth of July celebrations in Port Aransas include a fireworks display sponsored by the City of Port Aransas and Charles Butt of HEB Food Stores.

Pyro Shows of Texas will produce the show again this year.

The fireworks will be ignited from the Corpus Christi Ship Channel side of Roberts Point Park. Spectators may view the display from the park, but will be kept away from the ignition site.

The fireworks should be visible from just about anywhere in Port Aransas.

City officials remind the public that the law prohibits shooting fireworks in the city limits of Port Aransas. The fireworks ban includes the beach.