Wave down a shuttle and hop aboard 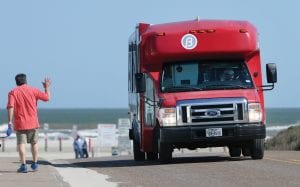 Do you want a ride around Port Aransas or all the way to Corpus Christi and back for a low fare?

The public transit system is offered and operated by the City of Port Aransas and the Corpus Christi Regional Transportation Authority.

The B-Line’s “Route 94 Trolley,” which offers reduced fares for eligible seniors and others for as low as 25 cents, runs a nine-stop route around Port Aransas daily from 10 a.m. until about 6 p.m.

Stops along the route are: Cinnamon Shore, Pioneer RV Park, Access Road 1A, the Leonabelle Turnbull Birding Center, Roberts Point Park, the University of Texas Marine Science Institute, Horace Caldwell Pier, Port Aransas Post Office and Mustang Beach Airport. Folks should go to one of those locations and not try to wave the trolley down between its regular stops, according to City Hall. 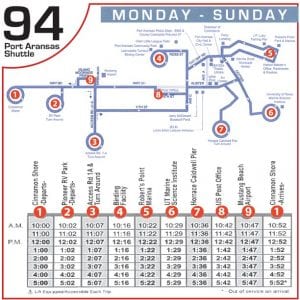 The B-Line’s Route 90 Flexi-B Shuttle, whose reduced fares can also be as low as 25 cents for some riders, offers trips to Corpus Christi.

All trips must be scheduled at least one day in advance.

For those with urgent transportation needs, the Flexi-B also will accept requests for travel on a short notice.

On Monday through Saturday, the Flexi-B’s return trip begins at 3:30 p.m., when it departs from Corpus Christi’s Southside Station near La Palmera Mall.

Different schedules and destinations are offered on Friday and Saturday.

Route 65 also goes by the name of the Padre Island Connection, but it extends to Port Aransas, too.

Once it gets to Port Aransas, the bus travels State Highway 361, Beach Access Road 1A, 11th Street and Avenue G before getting on 361 again and heading south, back to Corpus Christi.

The Route 65 bus passes through Port Aransas six times a day. The exact schedule can be found on the RTA’s website at www.ccrta.org/ccrta-map/.

For more information on RTA service in Port Aransas, call (361) 749-4111 or email city@cityofportaransas.org.

Information is also available at www.ccrta.org.