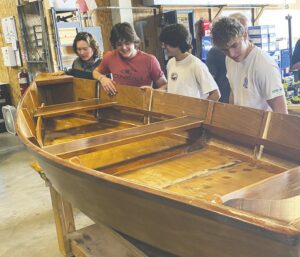 Wooden boats continue to be built in Port Aransas at the Farley Boat Works, located at 716 W. Ave. C.

The boat works is a working museum that features two Farley boats, an historical photo display, old tools, historic ship artifacts such as large ship compasses, boats in the process of being built and an outboard motor collection. You can commemorate your visit by purchasing T-shirts, hoodies and hats.

Coming soon is the Maritime Museum, a museum and event space that is under construction next door to the boat works.

Wooden boat building started in 1915 when the Farley brothers began making some of the first production fishing boats in the U.S. here in Port Aransas.

The Farley’s closed their doors in 1975.

About 120 wooden boats have been built at the boat works since 2011.

The boat works is now a branch of the Port Aransas Museum with a mission to carry on the tradition of wooden boat building in Port Aransas.

Today, Farley boats again are rolling out the front door as the operation provides the opportunity for folks to participate in a craft of their forefathers.

The boat works is open to the public for informal tours 8 a.m. to noon and 1 to 3 p.m. Tuesday through Saturday.

It offers space in which to build a boat, tools, materials and instruction on an individual basis or with their scheduled instructional classes throughout the year.

The non-profit organization also is building a Gulf Coast Scow Schooner, a replica of one of the kinds of ships that sailed in Port Aransas 170 years ago. The museum hosts Second Saturday parties in fall, winter and spring at the boat works with food and music for those who attend.

Farley boats came to Port Aransas when Charles Frederick “Fred” Farley, a skilled boat builder living in Alabama, was told by his brother Barney Farley Sr. in Port Aransas, that Port Aransas was a sport-fishing village that lacked a powerboat for tarpon fishing in the choppy sea conditions of the Aransas Pass. Fred’s brother said a boat builder could make a living providing marine products to the local boatmen (as fishing guides are called).

So, Fred moved to Port Aransas, and in 1914, he opened the Farley Boat Works.

The all-wood boats that Farley and his sons, Jim and Fred Jr., produced became the icon of the grand tarpon fishing era. Many a VIP fished aboard Farley boats, from the author of the definitive tarpon book of the day, Richard L. Sutton, who wrote The Silver Kings of Aransas Pass and Other Stories, to American president, Franklin D. Roosevelt. Fred’s other son, Don, was one of the boatmen distinguished by guiding the President on the famous 1937 tarpon trip.

The boatmen wanted a fishing machine that had relatively low sides to facilitate landing the hardfighting tarpon.They also wanted a product that could handle choppy water: Farley boats smoothed out rough water with their V-bottoms and a sea kindly design.

A few Farley tarpon boats had marine engines, but most were powered by converted automobile engines, usually provided by the customer, with Chrysler flat heads being the favorites.

The Farley Boat Works had locations southeast of the Coast Guard station, just off Mercer Street, and on Avenue C. After the business ceased operation, it was used by a pre-fab house builder, a part-time boat builder, a fiberglass manufacturing operation, an air conditioning business and a motorcycle shop until the preservation association bought it and gave it new life. You can follow some of the boat builds on Instagram @farleyboatworks or on Facebook.

Watch the weekly editions of the South Jetty for updates on events, workshops and seminars.